Everything around us is made of matter – both living and non living made up of matter.

The air, water, soil, rocks, plants, animals and even people are examples of matter.

Matter is everything around us that occupies space and has mass.

Living and non living things are classified as matters in term of solids, liquids, and gases.

Matter is everything around us.

Matter includes the air we breathe, water we drink, food we eat, crops we plant, animals we rear, etc. even our own body.

Matter can be classified as –

There are three (3) States of matter,

Solid matter is any object that has its own form and shape.

Liquid matter takes the shape of its container.

It takes the shape of any object – cup, bowl, bottle, etc. that holds it.

Gas is any substance like the air we breathe, steam from boiling water, smoke from the firewood, or exhaust from cars.

ATOMS AS FUNDAMENTAL BUILDING OF MATTER

The basic fundamental building blocks that make up matter are called atoms.

When two or more atoms stick together, they formed a molecule.

Molecules are made up of one or more atoms.

Atoms are the basic units of matter.

It is the smallest particle of a substance that has all of the physical and chemical properties of that substance.

An atom consists of electrons, protons and neutrons.

PROPERTIES OF SOLID, LIQUID AND GAS

Solid matter is any object that has its own form and shape.

The properties of solid matter are as follows:

Liquid matter takes the shape of its container.

It takes the shape of any object – cup, bowl, bottle, etc. that holds it.

The properties of liquid matter are as follows:

Gas is any substance like the air we breathe, steam from air, steam, smoke from the firewood, exhaust from cars, etc.

The properties of gas matter are as follows:

A change of state is a physical change in a matter.

The physical changes are reversible changes that do not require any changes in the chemical makeup of the matter.

The process of changes of state are as follows:

Melting is the process of changing substance from the solid state to liquid state.

Freezing is the process of changing from the liquid state to the solid state.

Condensation is the process of changing substance from the gaseous state to the liquid state.

For example, steam to liquid water.

Evaporation is the process of changing substance from the liquid state to the gaseous state.

For example, liquid water to steam.

Sublimation is the transition from the solid state into a gaseous state without becoming liquid.

The atomic number of an element is the number of protons in the nucleus of an atom of that element.

There are 118 known chemical elements.

There are 92 chemical elements found in nature.

Additional 20 elements are created by the scientists.

While the remaining are much more common than others.

The first ten elements with their symbols and atomic number in the periodic table are tabulated below: 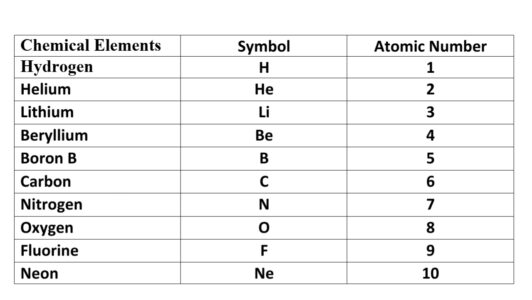 Answer all the questions:

1. explain the meaning of matter.

3. differentiate between solid and liquid matter with appropriate examples.

4. give 4 examples of gas form of matter.

6. mention the properties of solid, liquid and gas.

8. state the first ten elements on the periodic table with their symbols.